To purchase a copy of the exhibition cahier please contact Galerie B-312, Montreal, Quebec:

—Is there life after post-?— The term post-feminism, like its post-modern progenitor, has a multitude of connotations. Is it a backlash coming from within feminist camps, dismissing that initially essentialist (and white middle-class) subject position as naïvely binary? Does it refer to the playing out of a conservative endgame, camouflaged in po-mo irony and ambivalence but returning to pre-feminist values? Does it liken feminism to modernism as another grand narrative of exclusion in dire need of demolition? Or could it infer the post of post-structuralism, an academic stream of feminism limited to language and psychoanalysis? —To denote feminism as finished, post-, over, as equally institutionalized into the status quo as modernism, is patently ridiculous. It is one thing to resist or refuse to be placed in a feminist camp in order to encourage a revision or critique of the notion of feminism, but another to say the category has become redundant and doesn’t exist. My interpretation of all things post-, as with a post-colonial agenda for example, implies not after, but ongoing. Post- then is never-ending in its critique of the purism of binary structures, and in its renegotiating of power relations around cultural oppression. A post- position is also willing to question its own critical location, to discuss its inherent contradictions, and its multitude of contingent identities that can both unify and divide.—Doreen Wittenbols’s paintings do justice to the onerous task of representing an updated post-feminist notion of heterosexual identity. All too typically, contemporary artists’ interpretations of straight sexuality as cultural terms go no further than trading in bad girl titillation, or redundantly appropriating and cynically reproducing the forms and strategies of status quo pornography.— The strength of much of Wittenbols’s work is in the expansive richness of her approach, which is both critically savvy and unpredictably idiosyncratic in its subjecthood. Her straight white female position is much more than a performed role. Through the subjectivity of its oddball eroticism, the work becomes argumentative as a statement of her own post-feminist exploration of sexuality. And importantly, its meaning is brought to the surface by the material of her chosen media of paint.— In general, painting has not been present in Canadian artist run culture as of late, replaced in some cases by cutting edge new media that is somehow cleaner, more seamless and in some cases virtually overwhelming. It would be a mistake to rule out painting as a media on principle of its viability in the commercial art system, because there are paintings produced in Canada that are not necessarily market driven, nor intended to be bought and sold more than any other form of media.—But I do not wish to be a defender of the discipline of painting per se. Perhaps in its current state of deflation or neglect, making a painting can provide unexpected results that don’t revolve around technical mastery, as one of a multitude of possible material approaches to the representation of identity.—Wittenbols’s paintings begin by rejecting a rigidly academic framework as starting point to explore a category of woman’s heterosexuality. Instead, as a reflection of both social and intimate erotics, they return subjectivity, illusionism and painterliness to the agenda of visual culture with an investigative and intimate purpose.— Although Wittenbols’s material handling is unabashedly seductive in places, her paint doesn’t rest idly on the surface merely as formal eye candy. The quirky intimacy and strangeness of this work revives the need to exhume the now-dead notion of the author in order to revisit subjective desire, and female desire in particular.—Wittenbols’s new works continue to be set in uncannily familiar and banal locales, filtered through a decidedly intimate and unflattering lens. Portraits of friends and colleagues are morphed into scenarios referential to pornographic poses and settings. These two worlds are conflated further through the plastic quality of the paint, which hovers between illusionism and abstraction, fantasy and reality, the physical matter of the paint collapsed with its powers of illusory deception.—Ceiling (Head to Toe) possesses a singular dynamism that can only occur through the patient evolution of its painterly form. Through studio visits and .jpeg attachments, I have seen this canvas reinvented a number of times. It has been remarkable to watch it take shape and begin to have its own voice, its own logic, its own entity as a thing through Wittenbols’s organic working process in paint. Within the disoriented and disorienting space pictured here, two disembodied figures peer neurotically from under a tenderly painted blanket form that teeters on abstraction. This painterly element operates fetishistically to charge the portrayed boy-girl relationship with sexual tension.— As heterosexual representation, Wittenbols’s work sidesteps the well-worn tropes of both the transgressive mediafriendly “bad chick” persona (cigarettes, butterfly tattoos, biker boots) or the hyper-pink. Legally Blonde corporate daddy’s girl. Instead, the power plays involved with her roles are not mired in stereotype, but are more genuinely eccentric. There is also a collision of the humorous and the theoretical that takes these images far beyond the realm of the clever one-liner. In Looking for Love in All the Wrong Places (Self-Portrait as a Homemade Stripper), Wittenbols’s self-image from a bathroom mirror vantage point is decidedly unglamorous. Clad in a quirky pair of moccasins with phallic hairdryer in hand, her nonplussed expression suggests a weariness with the male gaze. Not only in terms of the expectations of feminine glamour but also in the predictable and static finality of film theorist Laura Mulvey’s canonical argument that identifies the act of gazing as masculine gendered. There is much more to these works beyond the entrapment of a gendered voyeurism.—The haptic seduction of this work should not be pitted in binary opposition to an academically justifiable argument about heteronormative sexuality. Wittenbols’s work refuses pleasure for its own sake and instead revitalizes the notion of a post-feminist erotics, where humour, the personal, the media and the socially constructed collide with the visceral and complex meaning inherent in the activity of painting. 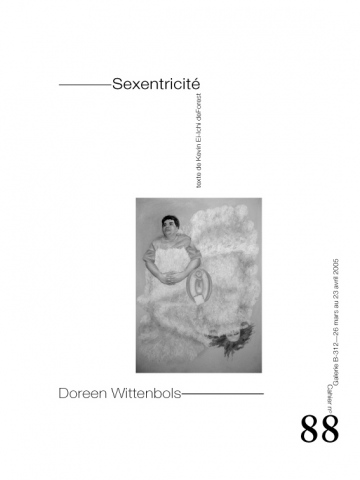